Why do I paint Madams who have a colorful past, or those with questionable actions? First, I am drawn to figurative art. Second, I am inspired by powerful women, and I champion the empowerment of women. And third, It’s fun. The entire time I’m researching or painting I’m amused. And it’s a little bit naughty. I typically use the element of shock value in both my writing and visual art. I like the edginess. I like the controversy. I like to push the envelope. It stimulates critical thinking.
​

Madame Mustache
12 x 24"
Acrylic & Combined media on wc paper, mounted on cradle board
$430
​
Little is known about Eleanor Dumont. Born Simone Jules in 1829 to Creole parents in NOLA. She moved to San Fransisco in 1849 and worked as a card dealer. Witty, vivacious, and charming, she walked the room rolling her own cigarettes and drinking champagne. But, Eleanor married a con man who took off with her money, sold her ranch, and left her in debt. She tracked and left him with a double blast from a shotgun.

Moving from city to city, gambling and stocking funds—in the 1860s she became a brothel Madame. With her increased age and fading beauty, the famous moustache began to grow—hence her coined title, Madame Moustache. In the end, among the sagebrush and coyote howls, Madame ingested a bottle of morphine to die alone.

Both a gambler and a madam, Alice Ivers Tubbs taught Sunday School to her parlor girls. She because a smart, winning poker player and she liked taking men’s money. She would not gamble on Sunday, but she had a taste for black cheroots and packed a .38 six shooter. One of her favorite sayings was: “Praise the Lord and place your bets. I’ll take your money with no regrets.”
​
Four times widowed, Alice finally opened her own gambling parlor/brothel in Sturgis, South Dakota. She was arrested several times for her disorderly house. During her career she won over a quarter of a million dollars. She died in 1930 at age 79 from complications from gall bladder surgery. 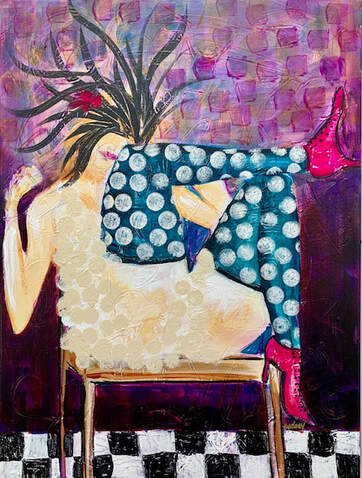 ​Mattie Silks, known professionally as Martha Ready, was a leading madam and brothel keeper in the late 19th century American West. Silks was born in Pennsylvania and raised in Indiana.
​
At the end of the Civil war Mattie, only 19 years old, was operating a brothel in Springfield, Ill. Later she operated houses at Olathe, Abilene, Hays and Dodge City. She was one of the best-known madams in the west, where demand for women was high due to the Colorado gold rushes. Silks was known as the “Queen of Denver’s Red-Light District”.
In 1909, Silks purchased the Denver House of Mirrors brothel for $14,000. She continued to work as a madam, travel, and invest in real estate, making her a wealthy woman. At one time her worth was half a million dollars.